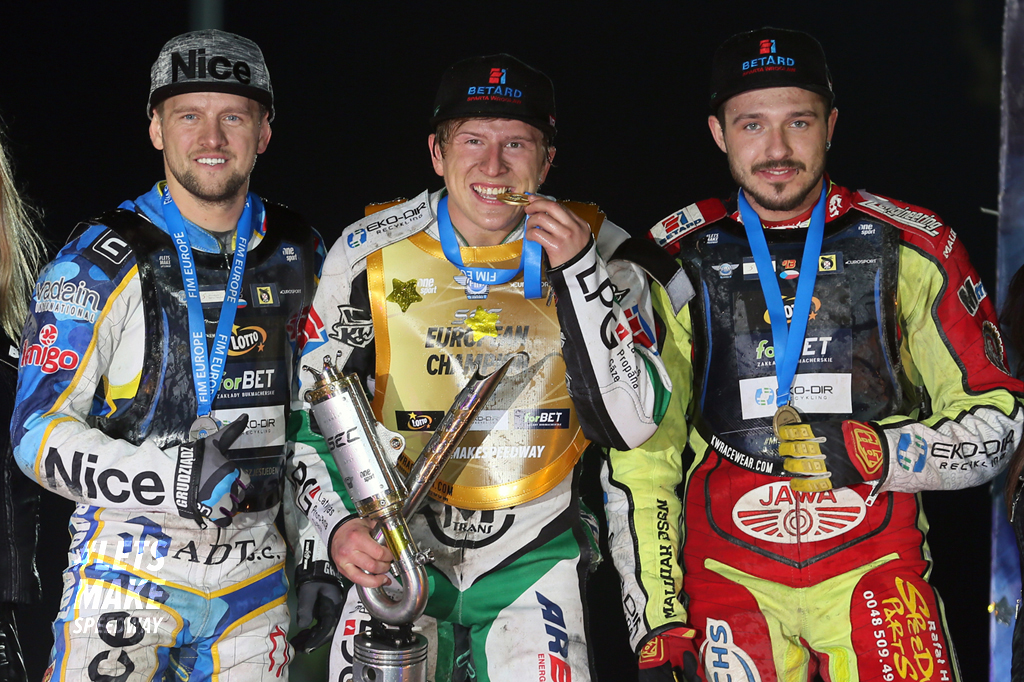 2018 started with the victory of Jaroslaw Hampel, who scored 17 points during the inaugural round in Gniezno. Then, the riders faced each other in Gustrow, where the British rider, Robert Lambert, sensationally won. The third round of TAURON SEC 2018 was held in Daugavpils. There, Leon Madsen presented fantastic disposition as it later turned out - it was the beginning of his road to the gold medal.

The grand final of the TAURON Speedway Euro Championship 2018 took place at the Silesian Stadium in Chorzów. A "one-day" track was created on the legendary Stadium. Meeting was won by Leon Madsen, who scored maximum of points (18). Jaroslaw Hampel and Robert Lambert stood on the podium as well.

Gustrow was the first arena of the TAURON SEC 2019, and at the venue full of fans, Grigory Laguta turned out to be the best. The second round took place in Torun, and the competition at Motoarena abounded in everything that is possible in speedway. Great races were mixed with falls and all this ended with Leon Madsen's victory. At the halfway the difference between Laguta and the Dane was only one point. The third round of the competition took place on the legendary track in Vojens. Due to the injury, Madsen was withdraw from the competition, which opened Grigory Laguta's way to the TAURON SEC gold medal. The Russian had his weakest performance of the season, while Mikkel Michelsen did exceptionally well. The Dane, who after the rounds in Gustrow and Torun was in the middle of the table, after the competition in Vojens grew to be a main candidate for the title.

The final of TAURON SEC 2019 again took place at the Silesian Stadium in Chorzów, and the emotions that accompanied it are indescribable. Michelsen caught up in the general classification Grigory Laguta and the gold medal was decided by an extra heat. Before it happened, the local hero - Kacper Woryna was fighting in the extra race with Leon Madsen for the bronze medal. Pole was leading, but a bike failure deprived him of the medal. In the most important race of TAURON SEC 2019, Mikkel Michelsen defeated Grigori Laguta and became the Individual European Champion.

2020 was torpedoed by a coronavirus pandemic. The qualifying rounds and the SEC Challenge were cancelled, and the TAURON SEC 2020 lineup were decided by the national federations that nominated their riders. It is worth to mention that the Individual European Championships were the first so important competitions that were held during the pandemic.

TAURON SEC 2020 had a special dimension. Five rounds of competition took place in Poland within 30 days. Robert Lambert won the title. The Brit presented an even, high form from the very beginning and two back to back round victories made the British rider take the trophy and a ticket to Grand Prix 2021. Second place was taken by Leon Madsen who set a record - three SEC rounds won in a row. The bronze medal went to Grigory Laguta.